HOW did couples find each other?

How did men and women meet through the mail?

How did they transition from a correspondence courtship to marriage?

How did mail-order marriages turn out?

The introduction of strangers requires a middleman. In the late 19th century personal ads and the help of mutual acquaintances were the means through which mail-order marriages were made possible. After the young man and woman had made each other’s acquaintance through a friend or personal ad, they would correspond by mail. Sometimes their courtship correspondence would be brief, providing only a physical description of their betrothed so as to facilitate finding them at the train station.1 Other correspondence courtships lasted a number of months.2 Jessie Betz and Otis Call corresponded for more than one year before marrying.3 Within the duration of the correspondence courtship, the man would usually propose, and if the woman accepted, he would often send money to cover travel expenses. This was particularly true when the bride had international travel costs.4 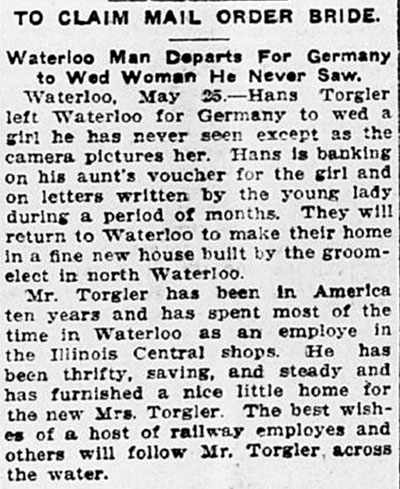 Usually the woman would travel, but occasionally the man would instead. Sometimes a man traveled to meet his bride and escort her to their new home, but in a few instances the groom-to-be would move to his betrothed’s place of residence.5 Upon meeting, both partners had an opportunity to renege on the engagement, at least theoretically.6

Many personal ads were short and expressed little beyond the age of the writer, and their hope to meet a good mate. Occasionally, however, some authors did wax poetic. 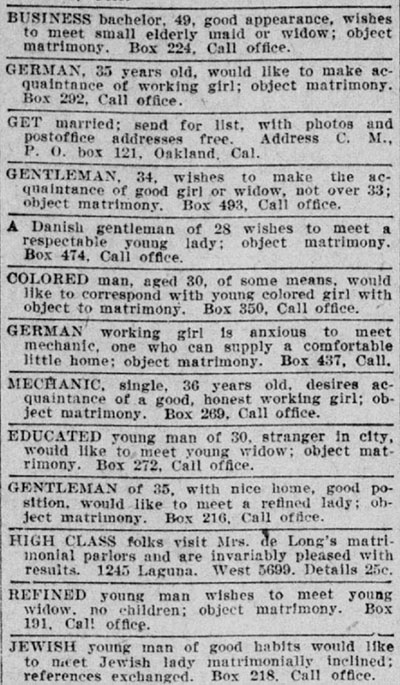 Men and women of all races and ethnicities sought to initiate relationships through personal ads. Perhaps the “German working girl” and the “Mechanic” would be a good match?
“Matrimonials,” The San Francisco Call (San Francisco, CA), February 7, 1909, 44. Chronicling America: Historic American Newspapers. 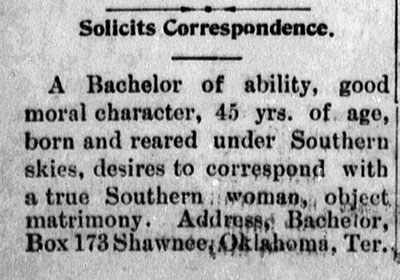 This hopeful bachelor lived in the Oklahoma Territory, but his personal ad was featured in a Texas newspaper.
“Solicits Correspondence,” The Democrat (McKinney, TX), February 27, 1902, 8. Texas Digital Newspaper Program.

Immigrant men moved into the West, just as American men had, in search of a better life. They similarly faced a shortage of women. Due to the lack of women, some immigrant men turned to mail-order brides in hopes of finding a wife of their own cultural background. Foreign-language newspapers helped them to achieve that goal.

All newspapers had the opportunity to enjoy a wide circulation thanks to low mail costs.8 Unlike regional papers that focused on local news, ethnic newspapers had a reason to reach a national audience – to connect pockets of the same immigrant group. As such, personal ads in foreign-language newspapers like De Volksvriend [Friend of the People], which was based in Iowa, reached members of the Dutch community throughout the United States. Likewise, the Finnish publication Työmies [The Worker] from northern Michigan, and the New York Yiddish paper Forverts [Yiddish Forward] included personal ads that would allow immigrants throughout the country to find spouses of the same ethnicity.9

In addition to submitting personal ads in newspapers, hopeful lovers in the late 19th century had the opportunity to seek a spouse through matrimonial periodicals. Matrimonial periodicals were publications with the goal of connecting men and women to achieve marital bliss. 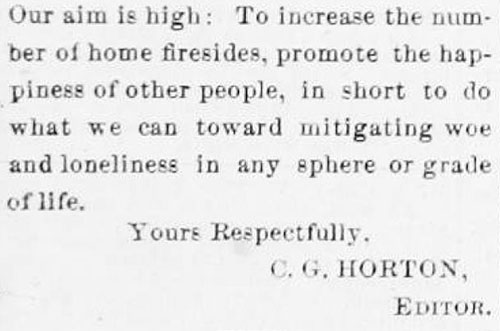 Despite their stated purpose, however, matrimonial periodicals included content that had no discernable connection to marriage. In an 1897 edition of Matrimonial News, for example, there were feature articles on coffee, fashion advice about mourning costumes, and advertisements for hog cholera cures throughout the paper.11 Personal ads filled the front page from top to bottom but were not present anywhere else.12 That personal ads were featured on the front page, however, is distinctive from other newspapers.

Another notable distinction between standard newspapers and matrimonial periodicals was their circulation. Whereas many standard newspapers were mailed to a regional readership and were likely to facilitate mail-order marriages within the same state or area, the circulation of matrimonial periodicals spanned the United States and Canada. As such, men and women were more likely to find a potential mate across the country.

In addition to personal ads, mail-order brides and grooms found each other with the help of mutual acquaintances. The most common intermediary were relatives of the groom, usually female, who would select a young woman whom they vetted on his behalf. Once they had made their selection, they would write to let the groom know. He would then wait to meet his bride off the train or boat.13

This method of introduction was particularly common for picture brides. In many ways, the picture bride phenomenon was an extension of arranged marriages – a practice that was still the norm in countries like Japan, and Greece.14  The custom, however, was seemingly foreign enough to American readers to warrant an explanation by newspaper articles. 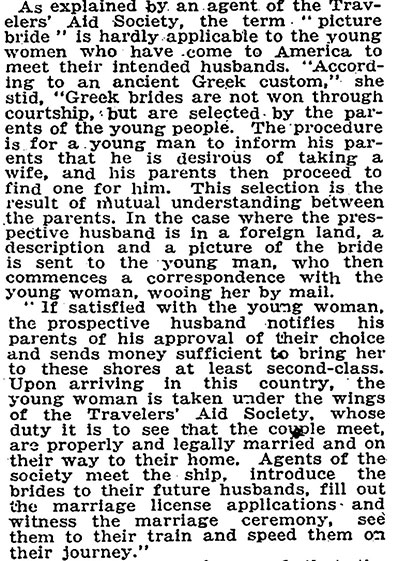 Abraham Calof became the husband of Rachel Bella Kahn because of mutual acquaintances. Both were originally from Russia, but Abraham had moved to the United States. In 1893 he sent word to his sister, Chaya, that he was ready to marry. He requested that she pick out a suitable bride, and promised that he would send travel fare. Chaya was a tenant of Rachel’s uncle. When he heard that Chaya’s first pick for her brother had fallen through, he offered Rachel. 15

Rachel was amenable because she was 18 years old and still unmarried. As many of her friends were already married, she feared that she would end up a spinster.16 Further, Rachel was working as a maid, and her family life was in shambles.17  Marrying a man in America would be a new beginning.

Before she sent Rachel to be her brother’s wife, Chaya had Rachel demonstrate her worthiness through a series of tests, tasks, and inspections. Once Chaya was satisfied, Rachel and Abraham exchanged photographs and a brief correspondence.18 Rachel then began her arduous trek to the United States. After three weeks of sea-sickness she finally reached New York.19 Recognizing Abraham by the photo that she had received through the mail, she found her husband-to-be.20 He was good to her, and even told her that she should not feel obligated to marry him.21 Rachel slowly began to trust her betrothed and embarked with him to North Dakota, where his family had begun to settle. Approximately three months after they met, Rachel and Abraham married. 22 This length of time between meeting and marrying was longer than most, but it also demonstrates that mail-order marriages were not a monolithic phenomenon.

Mail-order matches are a historical curiosity, but did they work? Certainly there were scams, and newspapers were not shy about reporting on them. Whether this was proportionally representative of the fate of matrimony-by-letter, or simply a feature of news (sharing sensational stories), is something to consider. 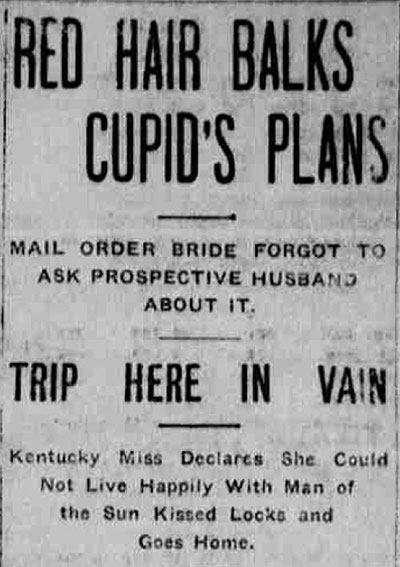 Mary Messey, of Bailard County, Kentucky, traveled by train to meet her fiancé, Michael Givven, in Kokomo, IN, but immediately renounced their marriage as a possibility because he was a red-head. She was quoted in a 1907 newspaper article explaining, “I just couldn’t live with a redhead man. I couldn’t. They are always so cross.”
“Red Hair Balks Cupid’s Plans,” The Cairo Bulletin (Cairo, IL), December 18, 1907, 3. Chronicling America: Historic American Newspapers. 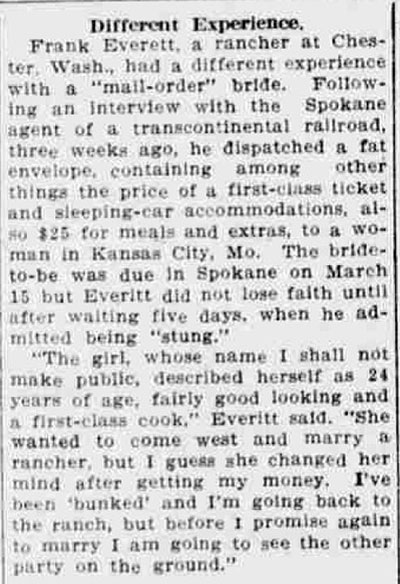 Some mail-order brides never even arrived at the station. Rather, they accepted the travel fare and pocketed the money.
“Mail Order Marriages: Two in Spokane Turn out Differently,” East Oregonian (Pendleton, OR), March 23, 1911, 6. Historic Oregon Newspapers.

In 1922, Solicitor John H. Edwards of the Post Office Department received many a letter from disappointed mail-order brides. They sought his assistance in finding husbands who had deserted them, arguing that the Post Office had been instrumental in them meeting their spouses. They cited courtship correspondence, and travel fare via money orders as examples of postal involvement in their marriage. Solicitor Edwards was unable to help them.
“Married-by-Letter Wives Seek Aid in Locating Husbands,” East Oregonian (Pendleton, OR), August 18, 1922, 10. Historic Oregon Newspapers.

What, though, was the quality of mail-order marriages if both the man and woman stuck it out? Any discussion of quality is inherently subjective because people have different preferences and expectations. Beyond recognizing personal variations in expectations, however, it is also important to acknowledge the evolution of the institution of marriage.

For millennia marriage has served essential nonromantic purposes, like allocating resources, rights, and responsibilities.23 It has been a practical tool for social advancement of all economic classes. A marriage between agrarian families could result in joining adjacent fields. Merchant families could utilize a dowry as an influx of money for business ventures. Among the nobility, marriages were diplomatic tools.24 Marriage was for the benefit of the extended kin network, not the happiness of the couple.

Today’s love match is a new phenomenon. It emerged in the United States and Western Europe between the American Revolution and the 1830s, eclipsing strategic partnerships as the primary motivation for marriage.25 There are many reasons why this change happened in these times and places. For instance, in the spirit of the American Revolution, young adults were able to assert more independence and choose mates of their own, circumventing the parental network. Additionally, in response to the rigid logic that dominated the Age of Reason, some folks responded by championing subjectivity and the individual. Also, as industries began to dominate the labor market, young people had new opportunities to work outside the home. This also gave them the chance to fraternize with their peers with less supervision. 26

The love match might have emerged at the turn of the 19th century, but that does not mean that it was immediately adopted. It is conceivable that because older notions of marriage had great momentum there was a period of gradual acclimation from arranged marriages to love matches. Perhaps mail-order marriages acted as a midway point by offering an element of choice to both men and women in choosing their spouses, without necessitating that the two be in love at the altar.27 Some mail-order spouses would come to love each other over the course of their marriage. Others simply did not associate love with marriage, and thus never expected their correspondence courtship to result in a romantic pairing.

5) For example, in 1911, Hans Torgler traveled from Illinois to Germany to escort his wife to her new home, but in 1873 Peter Patterson journeyed from New York City to Kansas, where he moved in with his wife, Louise Muntle, on her farm. “To Claim Mail Order Bride,” Evening Times-Republican (Marshalltown, IA), May 25, 1911, 2. Chronicling America: Historic American Newspapers.; Chris Enss, Object: Matrimony: The Risky Business of Mail-Order Matchmaking on the Western Frontier (Guilford, CT: Two Dot Books, 2013), 81.

6) Financial vulnerability was a reality that could discourage women, in particular, from walking away from a less-than-ideal mate.

8) The Post Office Department has subsidized newspapers and magazines since its earliest days in an effort to make information accessible to citizens. National Postal Museum. “The Post and the Press.” Accessed 9 August 2016.

13) This generalized trajectory comes from my observations of individual case stories, like those of Rachel Calof, and Phoebe Harrington Silbaugh, as recorded by Chris Enss. Enss, Hearts West, 33, 60.;  Calof, Rachel Calof’s Story, 9.  I have been able to document more mail-order marriages made possible by personal ads than by mutual acquaintances. I imagine that mutual acquaintances were helpful, they just didn’t leave paper records in the same way that personal ads did.

16) In the Jewish tradition, 18 was recognized as a particularly good age at which to marry; Calof, Rachel Calof’s Story, 8, 91-92, footnote.

‹ WHEN & WHERE did mail-order brides live? up WHY did men and women marry spouses they had never met? ›
Back to Top