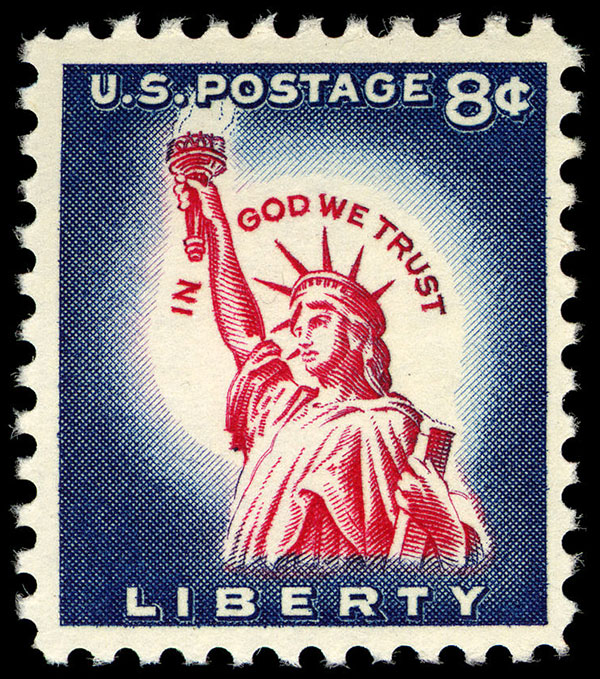 The 8-cent Liberty was produced both on the rotary and flat plate presses, and both versions were released on the same day. Four years later, Postmaster Arthur Summerfeld announced a third version of the stamp, to be released on March 22, 1958, printed on the new Giori press. The Giori could print a two-color stamp with a single pass through the press. The earlier stamps printed on both the rotary and flat plate presses required a separate feed through the press for each color. The earlier issues all had two plate numbers, one for each color, while the 1958 Giori-printed issue has only one plate number.

On the 8-cent Liberty, the torch is slightly dropped and the wording “U.S. Postage” is no longer broken by the torch.

The stamp was designed by Charles R. Chickering, and four different engravers were responsible for frame, the lettering, and the Statue of Liberty. The first day of issue ceremony was heralded by the Post Office Department as “the biggest ceremony of its kind in the history of the United States Post Office Department. . . ." Further, "It will set the stage . . . for the introduction of the nation’s first regular stamp bearing a religious significance.” The twenty-minute ceremony was covered on a unique national television hook-up throughout the forty-eight states.

It was considered a particular point of pride by the Post Office Department that this stamp would be used primarily to send letters abroad, eight cents being the one-ounce rate for international letters. “It will be our postal ambassador,” Postmaster General Summerfeld noted.

Issuance of the original 8-cent stamp with the “In God We Trust” motto preceded establishment of those words as a national motto by over two years. Public Law, 851, was approved by Congress July 30, 1956. 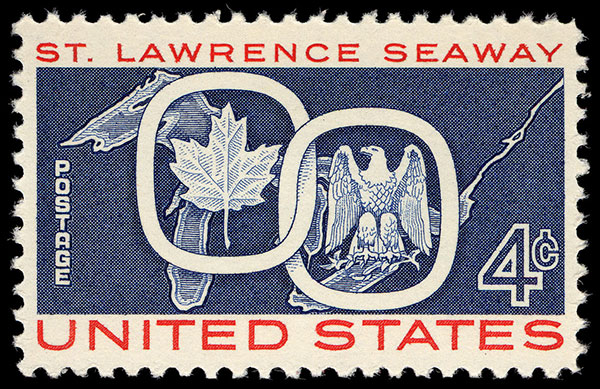 The 4-cent St. Lawrence Seaway Opening commemorative stamp was issued through the Massena, New York, post office on June 26, 1959. A stamp identical in design except for differences in the caption and denomination was released simultaneously, in Ottawa, Canada. The Canadian stamp was in the 5-cent value. Reproduced on the stamp are the emblems of both nations — the maple leaf for Canada and the eagle for the United States — enclosed in interlocking links and superimposed over a backdrop of the Great Lakes. Across the top of the stamp is the wording "St. Lawrence Seaway" and across the bottom "United States." To the left of the design is the lettering "Postage" arranged vertically, and the denomination "4c" appears in the lower right corner of the stamp.

Designed by Arnold Copeland, Ervine Metzl, William H. Buckley and Gerald Trottier, this stamp was printed on the Giori press and issued in panes of fifty stamps each. An initial printing of 120 million stamps was authorized. 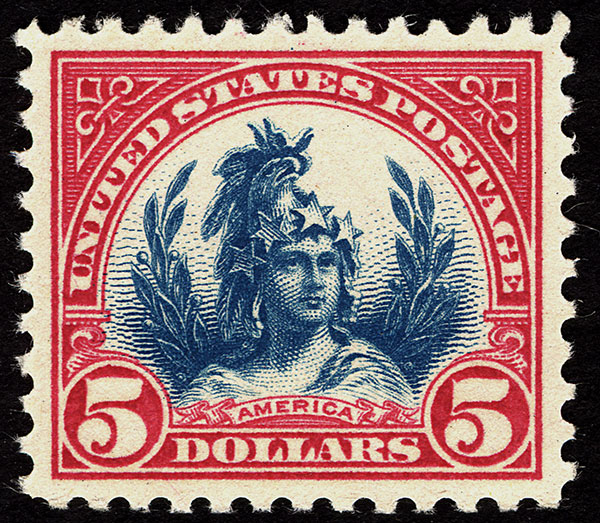 The 5-dollar Head of Freedom Statue stamp, which features the head of the sculpture atop the U.S. Capitol in Washington, D.C., is bi-colored, the vignette in blue and the frame in red. The Statue of Freedom by Thomas Crawford was erected on December 2, 1863, atop the Capitol. This was, of course, in the midst of the Civil War. Clair Aubrey Huston designed the stamp. The vignette, incorrectly labeled 'America' was engraved by John Eissler. Edward M. Hall and Joachim C. Benzing engraved the frame. It was issued at Washington, D.C., on March 20, 1923.