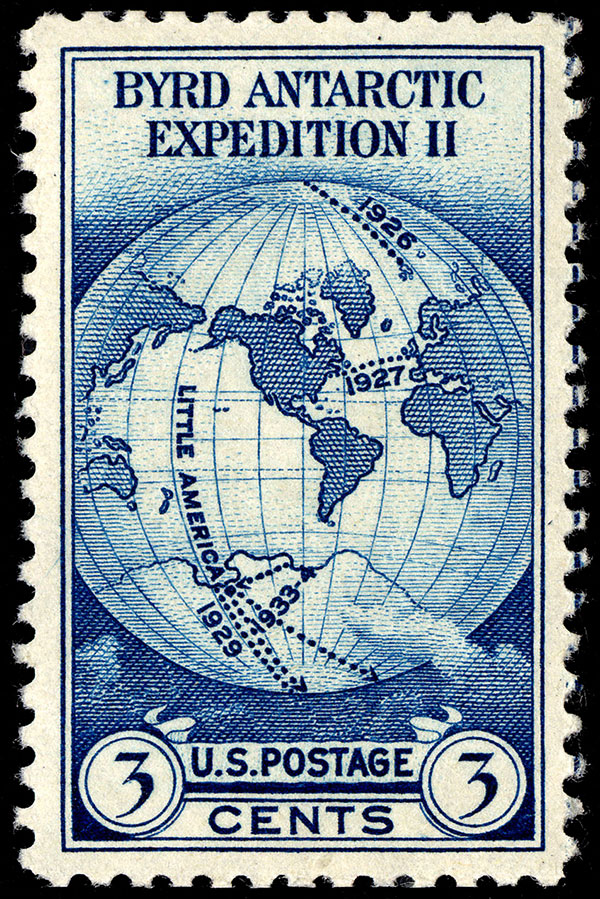 The Byrd Antarctic Expedition II stamp received immediate endorsement from the Post Office Department when an approved model and three die proofs were sent on September 22, 1933, from the Bureau of Engraving and Printing. This 3-cent vertical stamp, the same size and shape as a Special Delivery stamp, was intended for the collectors' market alone. The Post Office Department arranged for 'philatelic mail' bearing this stamp to be carried by the expedition and postmarked at the Little America post office at the expedition's base camp for a fee of fifty-three cents.

Pre-addressed covers and money orders payable to the Byrd Antarctic Expedition, Norfolk, Virginia, had to be received by the postmaster at Norfolk before October 8, the expedition's sailing date. After October 8 but not later than November 10, remaining covers would be forwarded by regular mail steamers to Dunedin, New Zealand, where they would connect with the expedition before it sailed for Antarctica on January 1, 1934. Covers taken with the expedition were returned by supply ship to Dunedin. They would reach U.S. destinations by summer 1934.

'Second cancellation' group of covers could be received for forwarding until November 1, 1934, the last date mail could be sent via Dunedin to Little America before the expedition's return home. The 3-cent Little America stamp was placed on the covers by the Post Office Department before shipping. That group would return to U.S. destinations by June 1935, having traveling about 25,000 miles.

Because the stamp was not intended for use on domestic mail, it was only sold through the Philatelic Agency of the Post Office Department. Nonetheless, the public soon inquired whether this new stamp could be used as postage on regular domestic mail, which it could.

On October 2, 1933, Richard Byrd wrote the postmaster general to thank him and all concerned, saying, "This recognition has helped us immeasurably in a number of ways."

President Franklin Roosevelt supposedly sketched the original design for this issue. Note that he signed and dated the sketch "4/25/34[35]."

Charles F. Anderson, special representative of the postmaster general, was assigned to the post office at Little America. He left Washington, D.C., on November 7, 1934, arrived in San Francisco on November 10, and sailed for Auckland, New Zealand, on November 13. He carried five full pouches of mail, seventeen empty pouches, a canceling machine, and other equipment. Five more arrived before he left for Little America. When he reached the continent, a dog sled transferred the mail and equipment to Little America, a distance of ten miles. To his dismay, he found that mail shipped a year earlier had never been cancelled and was sitting exposed under ice and snow. Anderson had only sixteen days in which to set-up the post office, cancel, and pack the mail. Expedition leaders had no conception of the difficulties involved. For instance, conditions twenty feet below the ice surface were abysmal, providing only enough heat to keep the ink warm enough to flow; water leaked overhead; and inadequate workspace where personal belongings and bedding often disappeared.

Cancelled mail was wrapped in waterproof paper, packed in cartons, encased in two heavy mail sacks, and locked. It was then stored in a tent outdoors, waiting to be loaded on to the next ship. Determined to cancel all the mail, Anderson slept only eighteen hours in sixteen days. "For the first time in the history of polar exploration a mail train was made up of dog sledges drawn by a tractor and with this train, I left Little America at noon February 4," he wrote. "Arriving at the barrier, at the edge of Eleanor Bolling Bay . . . I waited alone for twenty-six hours, without food or water, [until] the 'Bear of Oakland' . . . could be brought in through the braking ice." Back in San Francisco on March 25, "the mail was taken to the Ferry Street Post Office Station, where it was again worked. Five and one half days were required for 16 clerks and myself to rework this mail." A total of 153,217 pieces of mail were dispatched from San Francisco on March 30. 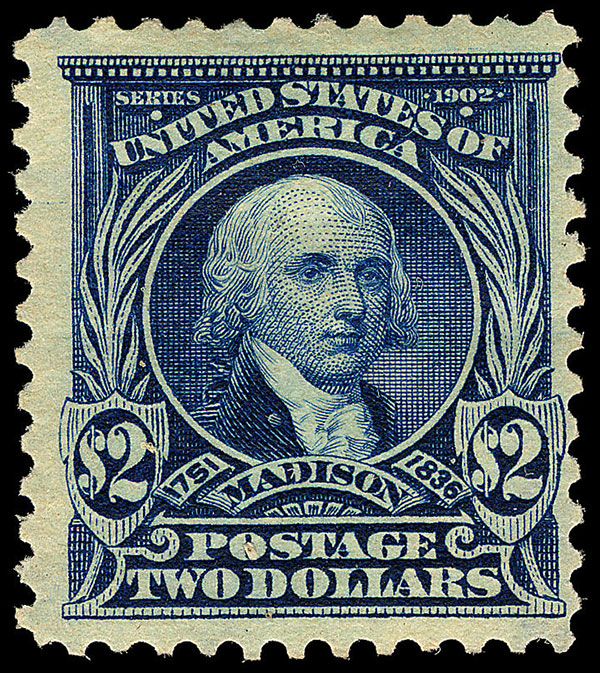 James Madison (1751–1836), the nation’s fourth president, is pictured on the 2-dollar stamp. Madison was born in Virginia and attended the College of New Jersey (Princeton University). A leader in the Virginia Assembly, he participated in the framing of the Virginia Constitution in 1776. At age thirty-six, he was a Virginia delegate to the Continental Congress in Philadelphia, where he helped frame the Bill of Rights and enact the nation’s first revenue legislation.

As secretary of state under President Jefferson, Madison protested the seizure of American ships by warring France and Britain as contrary to international law, and he supported the unpopular Embargo Act of 1807. Madison was elected president in 1808. The British impressments of American seamen and the seizure of cargoes impelled Madison to ask Congress to declare war on Great Britain on June 1, 1812.

The young nation was not prepared to fight England’s army, fresh from victories against Napoleon on the continent. The British entered Washington and set fire to the White House and the Capitol, and battles raged both along the Canadian border and in the South. Gen. Andrew Jackson's triumph at New Orleans brought the War of 1812 to a conclusion in 1814.

The dark blue 2-dollar stamp was issued June 5, 1903, as a sheet stamp printed from plates of two hundred and sold in panes of one hundred stamps with gauge 12 perforations. The stamp was designed by R. Ostrander Smith from a painting by an unknown artist. It was engraved by George F. C. Smillie (portrait), Robert F. Ponickau (frame), and George U. Rose, Jr. (lettering and numerals).

The 2-dollar Madison stamp was frequently used to pay intra-Post Office Department funds transfers. The stamp also franked large, foreign, letter rate parcels. In 1917 the 2-dollar Madison stamp was reprinted in a lighter blue with the then-used gauge 10 perforations. These stamps met a sudden demand for high-value postage to mail machine parts to Russia by parcel post as well as valuable shipments of Liberty Bonds in connection with World War I hostilities. 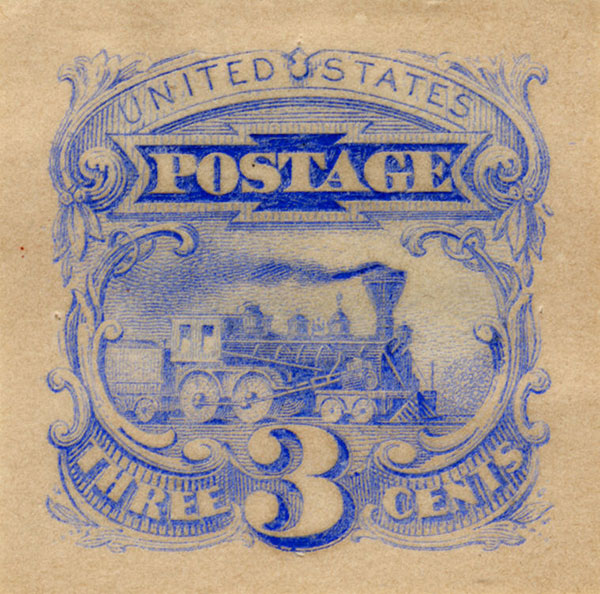 The National Bank Note Company, like all other private engraving and printing firms that created U.S. stamps between 1847 and 1893, also printed bank notes for U.S. banks. One of these was the Northwestern Bank of Warren, Pennsylvania. Northwestern's one-dollar note featured a right-facing, wood-burning train in its center foreground. NBNCo reused the design for the 3-cent locomotive stamp. Christian Rost, who engraved the 2-cent post rider, also engraved the 3-cent locomotive.

The use of a single 3-cent stamp on covers most often paid the half-ounce first-class domestic postage rate. Approximately 473,629,810 of these 3-cent stamps were printed by the National Bank Note Company and delivered to the Post Office Department. The 3-cent stamp was by far was the most dominant in terms of number printed, nearing eighty-two percent of the 1869 Issue. At the time of issue, the stamp was one of the most popular available. 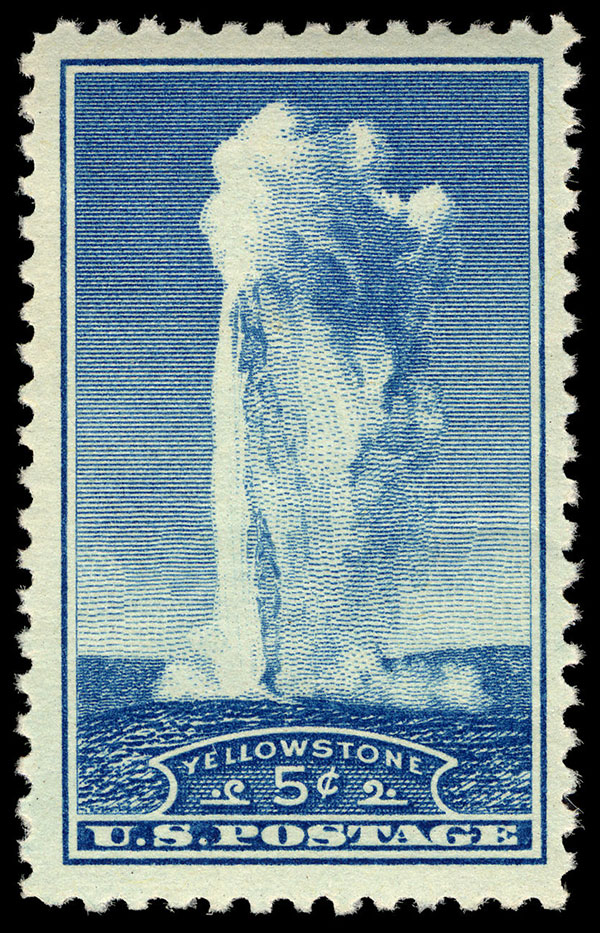 The 5-cent blue National Parks stamp issued July 30, 1934, features an image of Old Faithful geyser in Yellowstone National Park. Yellowstone is noted for its wide variety of thermal activity—geysers, hot springs, and bubbling mud pools, and for the spectacular Upper and Lower Falls in the Grand Canyon of the Yellowstone River. The nation's first national park, Yellowstone was established in Wyoming, Idaho, and Montana in 1872. 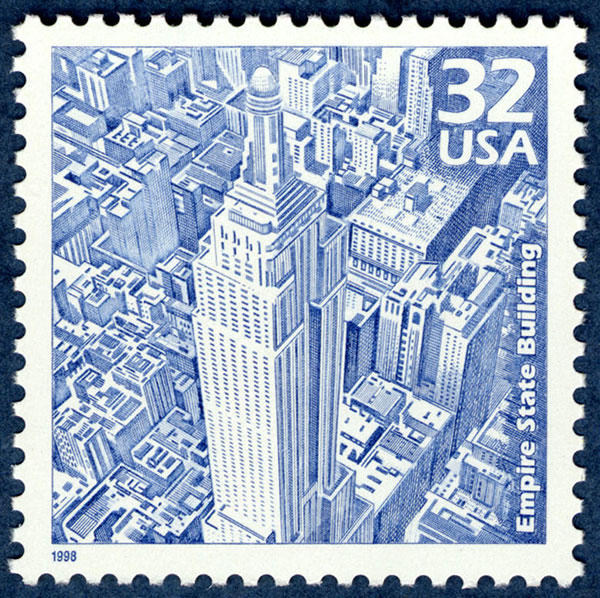 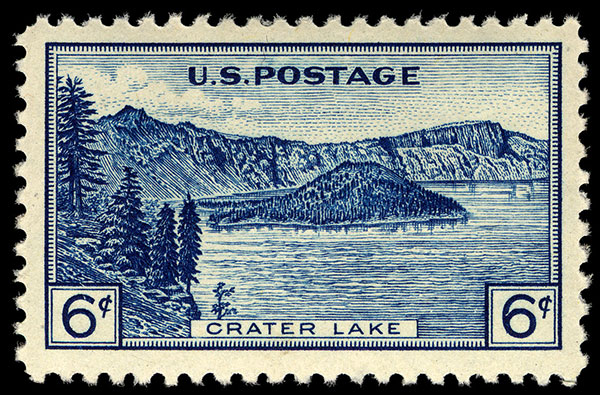 The 6-cent dark blue National Parks stamp issued September 5, 1934, pictures Crater Lake, a six mile wide body of water occupying the caldera of an ancient volcano. The color of the stamp suggests the deep blue waters of the lake, whose maximum depth is 1,932 feet. Crater Lake National Park was established in Oregon in 1902.