Shortly after Charles A. Lindbergh flew solo across the Atlantic Ocean from New York to Paris, the post office decided to break tradition and issue a stamp that honored a living American. Because the law prohibited the use of the portrait of a living person, the central design represented Lindbergh’s airplane, The Spirit of St. Louis. The plane was later suspended in the main entrance hall of the Smithsonian Institution’s Arts and Industries Building (later moved to the Smithsonian Institution’s National Air and Space Museum).

The 10-cent design in dark blue shows the start and finish points of the solo, non-stop flight and the 3,600-mile route, which Lindbergh flew in thirty-three and a half hours on May 20-21, 1927. The stamp was issued less than a month later, on June 18.

A. W. Hall, director of the Bureau, believed that the engraving of this stamp and the making of the printing plates were accomplished in a shorter period of time than any similar printing job by the Bureau. The model was approved on June 3 and engraving began the same day. On June 6 a proof was made, on June 8 the die was hardened, and on June 9 rolls and plates were made so that the next day the issue went to press.

The Lindbergh stamp replaced the previous 10-cent airmail stamp, and the first sale took place in St. Louis, Missouri; Detroit, Michigan; Little Falls, Minnesota; and the District of Columbia. Because of demand for airmail stamps in booklet form, the post office issued booklets with six Lindbergh stamps in panes of three on May 26, 1928. A couple of months later, on July 31, the airmail rate changed, creating a very short time of usage for the booklets. 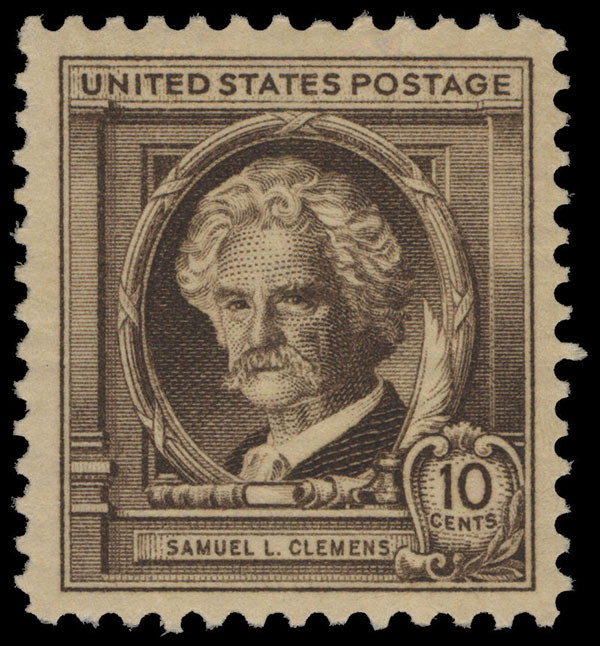 The 10-cent Famous American Authors stamp, issued February 13, 1940, pictures Samuel L. Clemens (1835-1910), better known by his pen name 'Mark Twain'. Mark Twain was possibly the most popular author in his time. His many works include "The Adventures of Tom Sawyer," "The Adventures of Huckleberry Finn," "The Prince and the Pauper," "A Connecticut Yankee in King Arthur's Court," and the non-fiction book "Life on the Mississippi." 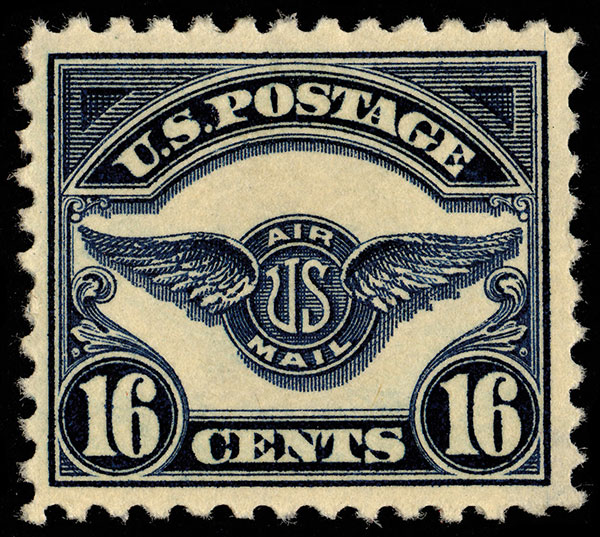 This 16-cent issue was the first United States stamp designated for airmail purposes that had the words 'Air Mail' in its design. Originally scheduled to be issued in black, when the design was approved on August 6, 1923, it was decided to print it in deep blue. The Post Office Department first issued the stamp in Washington, D.C., on August 17, 1923.

The stamp's central design is the official insignia of the Air Mail Service-a circular center with spread wings. The meaningful design and rich color of this stamp make it one of the most popular single-color airmail stamps ever produced. C.A. Huston designed the stamp, which was engraved by H. Dawson and E. M. Hall.

The Bureau of Engraving and Printing used four plate numbers (14828-14831) for this design. The plate numbers appear eight times on each four hundred subject sheet adjacent to the fifth stamp from each outside corner, so that each pane of one hundred stamps has two plate number blocks of six. The Post Office Department issued 5,309,275 of the 16-cent stamps.

This stamp was good for payment of airmail postage on an item of one ounce or less across two zones of the Transcontinental Air Mail Route (westbound, New York-Cheyenne, Chicago-San Francisco; eastbound, San Francisco-Chicago, Cheyenne-New York) or a double-weight letter over one zone. 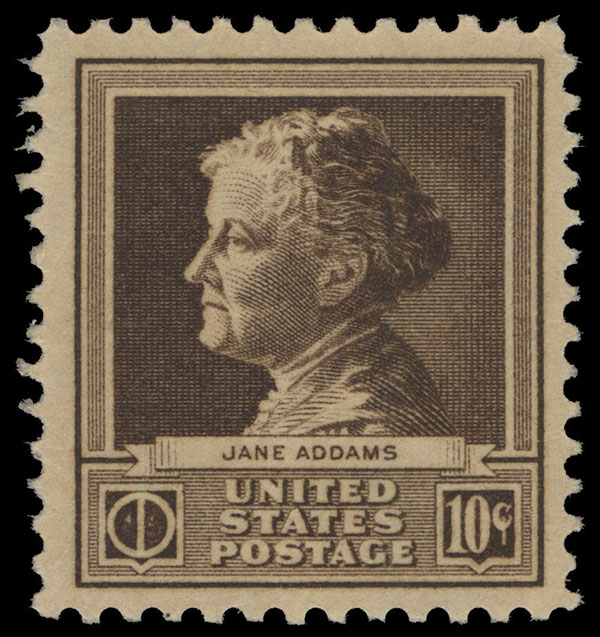 Jane Addams (1860-1935) is honored on the 10-cent Famous American Scientists stamp issued April 26, 1940. With her friend Ellen Gates Starr, Addams founded Chicago's Hull-House in 1889. Hull-House inspired the nation's settlement house movement, which provided crucial social services in poor and working-class neighborhoods. She was also the first president of the Women's International League for Peace and Freedom, serving from 1919-1929. Addams received the Nobel Peace Prize in 1931, the first American woman to receive this honor. Though involved in many Progressive-era reform movements, her gravestone in Cedarville, Illinois, simply reads: Jane Addams of Hull-House and the Women's International League for Peace and Freedom. Clearly, she considered these her life's greatest achievements. 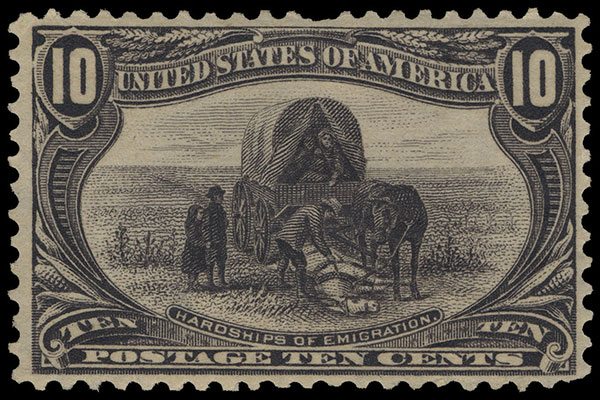 In contrast to the triumphant images which adorn previous denominations of the Trans-Mississippi Exposition Issue, the 10-cent stamp portrays the hardships of the expansion and emigration westward. The stamp depicts the pain of a dying horse with its desperate owners on their way westward. Augustus Goodyear Heaton did the painting that inspired the image for the 10-cent stamp. Several years earlier in 1892, the Bureau of Engraving and Printing used another one of Heaton's paintings for the 50-cent Columbian Exposition Issue stamp. The image used for the Trans-Mississippi Exposition Issue 10-cent stamp was painted by Heaton around the same time his Recall of Columbus Painting was adopted by the Bureau for the Columbian Issue.

The stamp could have been used to pay the domestic registered mail fee and the first class rate in one stamp. In some cases it was used with other denominations to fulfill large weight and destination rates. A total of 4,629,760 stamps were printed by the Bureau of Engraving and Printing. 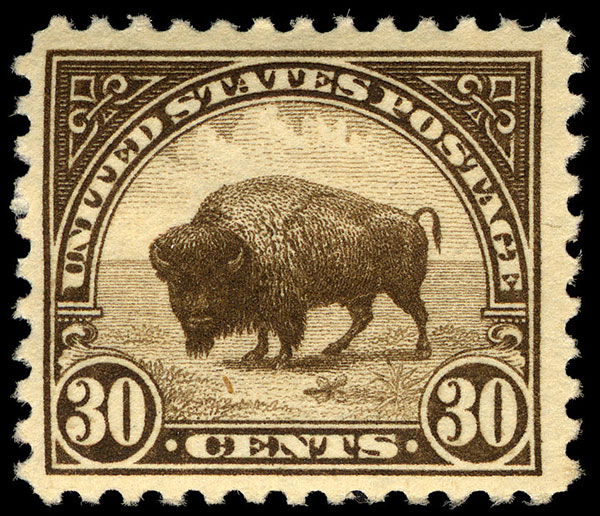 Issued on March 20, 1923, the 30-cent stamp featured a buffalo that resembled the 'buffalo nickel' in circulation at the time. It is the only stamp in the series on which a ribbon does not appear under the vignette. Clair Aubrey Huston chose a 1901 drawing of a bison by Charles R. Knight as the basis for the vignette. Knight reported that he completed his drawing by observing a bison at the Zoological Park in Washington, District of Columbia. Louis Schofield engraved the vignette. Edward M Hall and Joachim C. Benzing engraved the frame. Issued at Washington, D.C., and printed on the flat plate press, the stamp was subsequently printed on the Stickney rotary press.