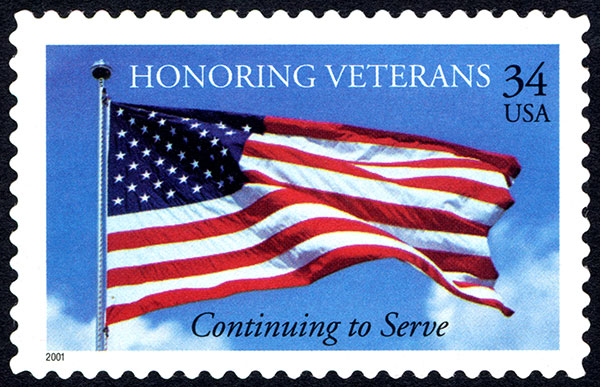 The Postal Service issued a 34-cent Honoring Veterans commemorative stamp nationwide on May 23, 2001, with a First Day of Issue ceremony in Washington, DC. The stamp, designed by Carl Herrman of Carlsbad, California, is based on a photograph from Harold Lambert Studios Inc.

With the issuance of this stamp, the Postal Service honored the patriotic dedication of all the men and women who have served in the US armed forces. The present population of US veterans is estimated at nearly 25 million.

The stamp art is a photograph of the United States flag. One of the most recognized symbols of freedom in the world, the US flag also symbolizes the patriotic service to the nation — in peace and in war — of all US veterans. The phrase "Honoring Veterans" appears at the top of the stamp, and the phrase "Continuing to Serve" appears at the bottom. 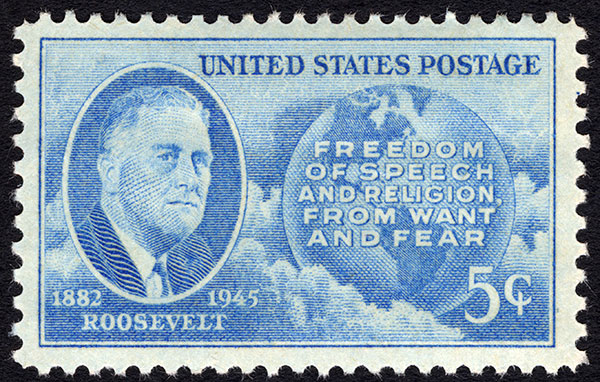 The last of the Franklin D. Roosevelt memorial series, a 5-cent blue stamp, was issued on January 30, 1946. The design shows a three-quarter face portrait of Roosevelt on the left surrounded by clouds, with a globe oriented to show the Americas on the right. Written across the globe is an expression of the Four Freedoms—'Freedom of Speech and Religion, From Want and Fear'. The concept of the Four Freedoms was first enunciated by Roosevelt in his address to Congress on January 6, 1941. It was in this address also that he declared that isolation from global affairs was not an acceptable position for the United States. 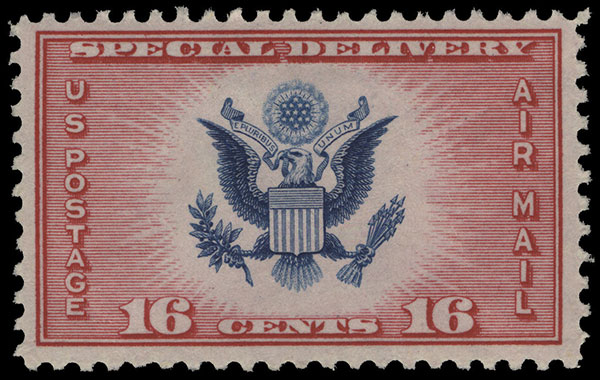 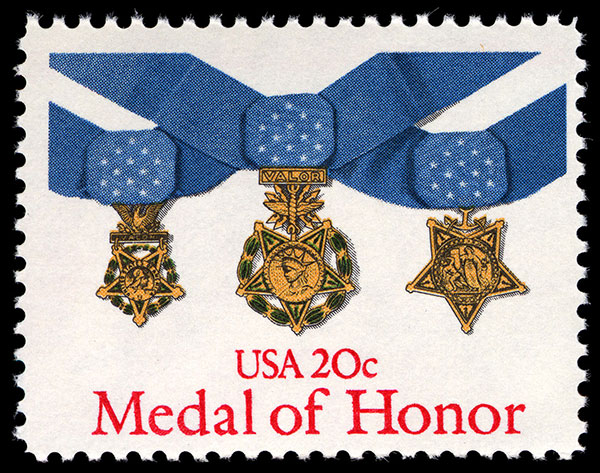 A 20-cent commemorative stamp honoring the Medal of Honor, the nation's highest award for valor, was issued June 7, 1983, at the Pentagon near Washington, DC. The stamp honors not only the medal but all those to whom it has been awarded.

Designed by Dennis J. Holm and modeled by V. Jack Ruther, the stamp was printed in the offset/intaglio process, with forty stamps per pane. 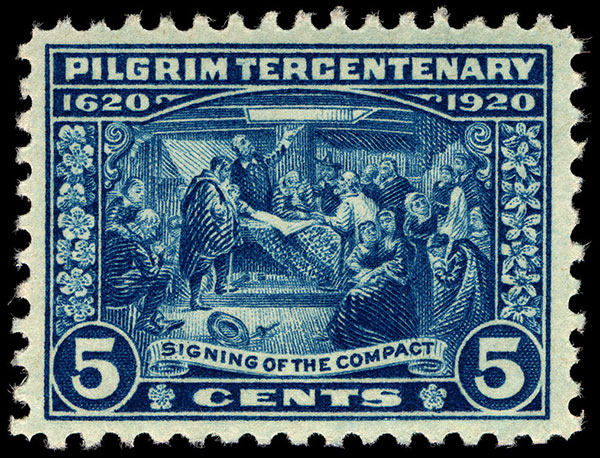 A painting by American artist Edwin White (1817-1877) inspired the image for the final denomination of the Pilgrim Tercentenary Issue. The signing of the Mayflower Compact was the first major political event of American history.

Patrons commonly used the 5-cent stamp with other denominations to fulfill large weight and foreign destination rates. Approximately 11 million of these 5-cent stamps were printed by the Bureau of Engraving and Printing and issued to the public. 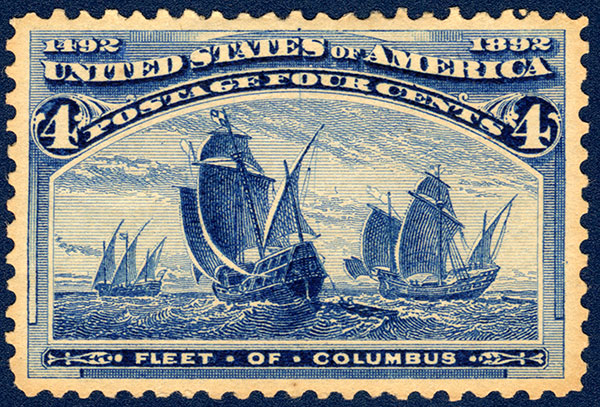 The origin of this stamp's design is obscure. Many publications attribute the design to a Spanish engraving, but in his Chronicle article on this stamp, George B. Arfken referenced an article in "Essay Proof Journal" that noted the appearance of a similar design in an American book published in mid-1892. This would have been six months before the Columbian Exposition Issue was released. There were striking similarities between the two images. In the end, the authors of both articles could not say conclusively that American Bank Note Company engravers had used the book’s design for the stamp image.

The Columbian Exposition Issue's one major error appears on the 4-cent Fleet of Columbus. It is a color error: the ultramarine-colored ink of the normal printing was mistakenly replaced by a blue-colored ink, similar but not identical to the color of the 1-cent Columbian. Two sheets of the error were supposedly purchased by the public before being discovered.

The 4-cent Columbian Exposition stamp most often paid the double-weight, first-class mail rate. But two 4-cent stamps would conveniently pay the registered mail fee or, in combination with other denominations, any number of other domestic and foreign destination rates. American Bank Note Company printed a total of 19,181,550 stamps of this 4-cent issue. 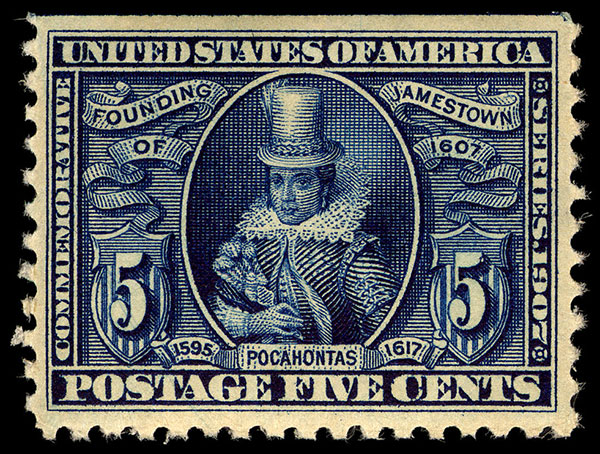 The image of Pocahontas used for the 5-cent stamp of the Jamestown Exposition Issue was modeled from a portrait engraved by Simon Van de Passe in 1616. The image appeared in a book published by John Smith in 1624.

This 5-cent stamp was commonly used with other denominations to fulfill large weight and foreign destination rates. Approximately 8 million of this 5-cent issue were produced by the Bureau of Engraving and Printing and issued to the public. 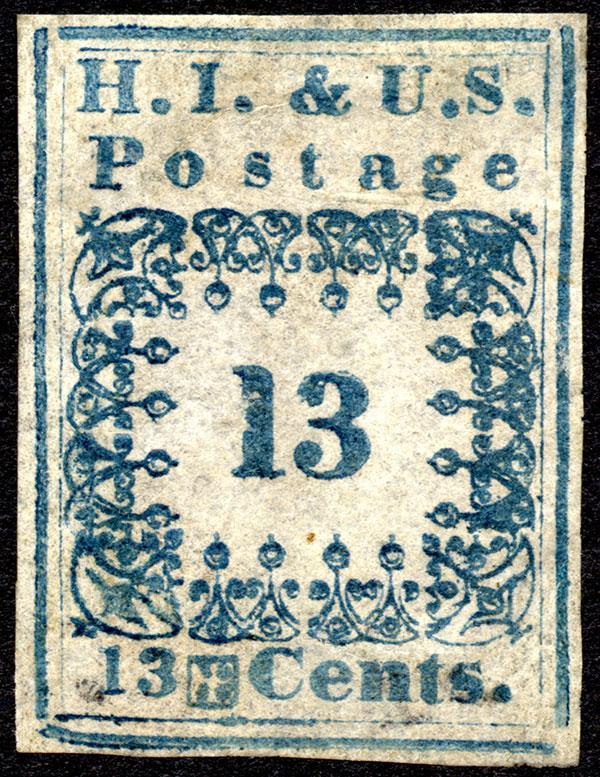 In 1851 the Kingdom of Hawaii authorized the printing of postage stamps to prepay the rates on outbound mail. Henry M. Whitney, Hawaii's first postmaster, printed the blue stamps on a hand-operated press in the Honolulu office of the government newspaper. Known as the "Missionaries" because of their use by Christian missionaries who wrote back to the United States, the first three issues featured the text "Hawaiian Postage" in two, five, and thirteen-cent values. In 1852, a revised thirteen-cent stamp featured "H.I. & U.S. Postage" to clarify that the stamp prepaid postage for Hawaii, the ship fee, and delivery in the United States. 197 examples of the Missionaries have been recorded to date.

The Hawaiian Missionaries from the National Philatelic Collection include one example of each of the first four issues plus four envelopes mailed to the United States during 1851-52. The cancellations include a circular datestamp, a crayon marking, a sugar cane marking, and three types of cork killers.