Henry Meloy, born in Townsend, Montana in 1902, left his home state to attend the Chicago Art Institute in 1923, never realizing one of his most memorable works, Flathead War Party, would take him back home twenty years later. Meloy’s art career became thereafter centered in New York City and, in 1926, he became one of many artists influenced by the so-called “Ashcan School,” movement of “Realist” artists led by Robert Henri at the National Academy of Design. The Ashcan School led a force to depict scenes of the daily lives of neighbors, mostly of those in lower income levels, as opposed to the art accepted by the art “academics” of the time.  This endeavor was followed by a period of experimenting in Abstract Expressionism. The New York’s East Village brought him into contact with the styles of artists such as Jackson Pollack, Willem de Kooning, Alexander Calder, and Frank Mechau, who was also from the West in Colorado. Both Mechau and Meloy would later become post office mural artists. Mechau eventually influenced Meloy’s approach to his depiction of the Flathead preparing to confront the Blackfeet in retaliation for their raiding of horses and their efforts to stop the Flatheads from expanding their hunting grounds.

Meloy’s post office mural assignment allowed him to illustrate an historical Montana situation involving Salish-speakers originally known to native peoples in British Columbia and then to non-Native Europeans as the Flathead. These inland Salish (Flatheads) were originally from British Columbia, a location still the home of the Coast Salish. Today’s Confederated Salish and Kootenai Tribes of the Flathead Reservation refer to these particular Salish as the Bitterroot Salish. They have been noted as the first recorded inhabitants of the Bitter Root Valley of southwestern Montana. A misnomer, “Flathead” may have originated by those in British Columbia who saw the regularly-shaped heads of this band as odd compared to their own which had been reshaped to be more pointed. According to the website of the Blackfeet Nation, the appellation Blackfeet comes from “the characteristic black color of their moccasins, painted or darkened with ashes.” They are located in northwestern Montana, bordered on the north by Canada and on the west by Glacier National Park. The Blackfeet who remained in Canada after their migration from the Great Lakes region are called the Blackfoot.

Meloy defined the location by creating a background of the Bitterroot Mountains and Mt. Como.  The Bitterroot Salish acquired horses in the 1700s. The introduction of horses into the Southwest by the Spanish in Mexico, which were traded northward after the 1600s, then and thereafter changed the hunting and trading ways, as well as the defense methods of Plains and Plateau-area peoples. Successful buffalo hunts and the increase of a tribe’s hunting territory resulted from increase in horse herds. Predictably, territorial conflict and wars resulted.

It is interesting to review the correspondence found in the National Archives Record Group 121 – Montana, Box No. 60, Entry 133, between the artist Meloy, and the Federal Government representative, Edward Rowan, concerning the mural development.

May 23, 1942. Letter to Rowan from Meloy. “I chose the subject matter after considerable research on the present aspect and historical background of Hamilton and its environs. It represents a group of Flathead Indians making up a war party to fight against an approaching band of their traditional enemies, the Blackfeet of Northern Montana. The incident, though not specific as to place or date, is one that happened many times in the Bighorn Mountains, as these two tribes were constantly at war. The subject lends itself to a fine arrangement of movement and color, expressive of the Indian and wild mountain country.” 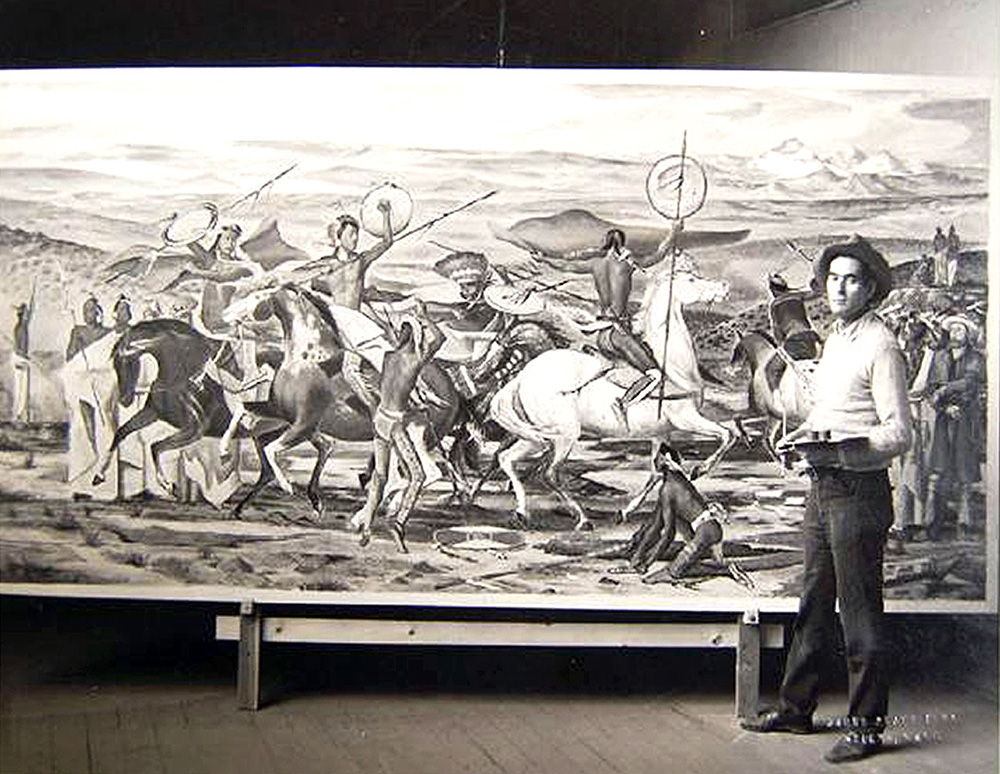 The mural was well received and the Daily Missoulian headline on September 28,1942 read, “Action Picture of Salish Indians Ready to Head Off Marauders. Hamilton, September 27, a mural telling a story of early Indians in the Bitter Root Valley, was hung Sunday in the Hamilton Federal Building’s post office lobby. The painting is the work of Montana-born artist Henry Meloy of Townsend. Hung on the lobby’s west wall, the mural is a scene of splendid action. Some twenty Indians are gathered, the young braves mounted on their ponies, ready to charge after a thieving horde of Blackfeet savages. The Blackfeet have come into the valley from the north to steal ponies and a scout having forewarned the Salish, there is a quick making-ready-for-fight. A lone white man with long golden hair, is somewhat passive figure, but he apparently counsels with the Indians. The wet Bitter Root Mountains, painted in a general rugged background feature the Como Peak.”

It is not unexpected the news writer’s tone would sound as if it were right out the narration of a wild, yelping cowboy and Indian movie of the time, nor is the use of the phrase “thieving horde of…savages,” words which would have lasting impact on the concept the general public would retain even into the 21st century. “A lone white man with long golden hair” in the lower right-hand corner of the mural proves to have been an homage to Henry Meloy’s old friend Frank Mechau. A Montana State University’s 1989 master’s degree candidate, Elizabeth Mentzer, states in her thesis, Made in Montana: Montana’s Post Office Murals that she had spoken with Sue Near, then Curator of Collections at the Montana Historical Society. Near had contacted retired Judge Peter Meloy, brother of Henry Meloy, validating the theory that the White man in the mural was indeed Meloy’s “long-time friend” Frank Mechau.

Painting yourself or someone else into a commission was a device used as early as 1536, after the style of Michelangelo in his Last Judgement at the Sistine Chapel, where he is said to have used his own likeness for that of St. Bartholomew.  Sometimes post office mural models were chosen as a political favor to important persons in the town where the post office was located.  The face of the postmaster of Natick, Massachusetts was used to represent Captain Prescott, and that of a local politician as model for Puritan missionary John Eliot himself in the mural, John Eliot Speaks to the Natick Indians. (See this essay within this website under “Evangelizations.”)

The close association of Meloy and Mechau would become very important in the interpretation of the Montana mural as the tone, actors, style, and actual images themselves relate directly to another mural, one created by Mechau, Dangers of the Mail located in Washington DC at the Ariel Rios Federal Building. Also a post office mural, Dangers of the Mail has been in question by SAIGE, the Society of American Indian Government Employees, for its extreme violence emphasizing a wild and dangerous “otherness” of the Plains and Plateau Indians as they ambush a stagecoach and abuse the captured women. The raised arms, shields, spears, flying capes and generally urgent and turbulent action in Flathead War Party actually duplicate in some instances those found in Mechau’s Dangers of the Mail mural. The indications unwritten within Meloy’s mural show he found it important to look to Mechau for guidance, when at the same time he chose to rely on his own Montana memories of American Indian stories to create the tranquil and gentle illustrations in the 1941 western novel, Tepee Days: Tales of the Prairies. Frank Mechau later had joined Meloy among other artists in 1944 for a joint exhibition at Columbia University. Meloy taught painting and drawing at Columbia University from 1940 until his death at in 1951 at age 49.

The Confederated Salish and Kootenai Nations were relocated to Northern Montana by the 1855 Treaty at Hell Gate in the Bitterroot Valley, losing 20 million acres of their homeland. In 1940, tribal members began to buy their lands back, and today their reservation covers 1,244,000 acres.

References not directly referred to within the text:

Annual Report, Columbia University of the City of New York, 1944

Treaty with the Flatheads, Etc., 1855. (fws.gov/pacific/ea/tribal/treaties/flatheads_1855.pdf)

The Indian Congress of 1898 / the term “Flathead” (omahapubliclibrary.org/transmiss/congress/flathead.html)

‹ Cultural Contributions of North, South and Central America up Cherokee Farming and Animal Husbandry ›
Back to Top