On December 15, 1922, Henry G. Boonstra left Salt Lake City, Utah at 7:30 a.m., heading for Rock Springs, Wyoming flying de Havilland airplane #249. Boonstra was flying low, under a solid layer of clouds, and trying to stay at least 200' from the ground. Without warning a gust of wind pushed his airplane into Porcupine Ridge southeast of Coalsville, Utah.

As the airplane smashed into the ground at flying speed, the landing gear collapsed and de Havilland #249 slid on its belly to a stop on the ridge. Boonstra was on an almost inaccessible mountain range 9,400' high and away from civilization. He had to walk for 24 hours through snow sometimes up to his waist to reach help at a cabin where he was taken in and helped.

Mail recovered from Boonstra's crash in December 1922, was marked:

Although abandoned by postal officials as a complete washout and irretrievable, the airplane had a second chance for life when an enterprising man retrieved the airplane and rebuilt it. The airplane that Boonstra flew into a mountain in 1922 is now on display in the National Postal Museum. 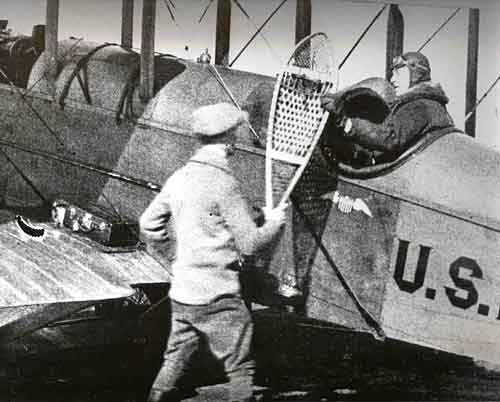 Boonstra receiving a pair of snowshoes to take on his flight. After Boonstra's crash in deep snowy mountains, pilots crossing mountain ranges were issued snowshoes in case of forced landings in remote areas. 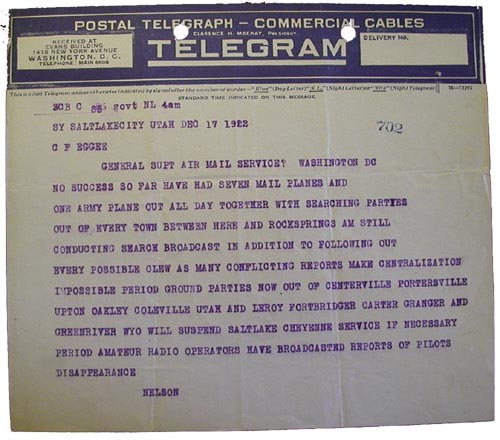 Telegram reporting the progress on the search for Henry Boonstra, December 17, 1922.

Because he was unable to contact airmail officials for three days, Boonstra's disappearance was especially worrisome, as they did not know if he was alive or dead. The service breathed easier when he was finally able to make contact with them. On December 21, Arlen C. Nelson, Superintendent of the Western Division wrote to his boss, Carl F. Egge, of the excitement they felt by finally locating Boonstra. "I need not tell you that for three days and nights practically our entire personnel here and at Rock Springs went without sleep and worked far into the night, all mechanics working that the ships might be in good shape and that others might personally be on the ground to direct the searching parties – many acted as observers."

Boonstra seemed overwhelmed by the worry he had caused, as he noted in a letter to F. A. O'Leary, the field manager at Salt Lake City.

Thirty minutes out of Salt Lake, flying low under clouds and clearing mountain peaks by about two hundred feet, I apparently ran into a strong wind square on my tail. Without time to attempt turn or throttle the motor, or cut the switches, the airplane dropped to meet a ridge. The landing gear collapsed and the airplane slid on its belly up over the ridge and came to a stop.

The bottom of the radiator, bottom of the gas tank, and bottom of the motor, were scraped away from sliding over the stones and pebbles. The altitude of the ridge is about ninety-four hundred feet, and almost inaccessible.

I took the compass and my traveling bag and started on my journey toward civilization. The ridge was bare of snow, but before I had gone a hundred yards down the north slope, I was floundering in snow to my waist. I used the bag in one hand and a stuffed pair of trousers in the other hand to help support my weight on the snow and started crawling down the slope through the woods. Progress was slow and tiresome, necessitating frequent stops for rest, but I kept at it all day and night and at daybreak came to the edge of the woods. The temperature was below zero and during rest periods I could feel my feet getting numb. The only sign of habitation I could see was a barn about three miles straight ahead. I struggled toward the barn throughout the day with the blizzard raging and at times obscuring all vision. Progress was fearfully slow and my leg muscles were almost refusing to function. About three P.M. I came close enough to the barn to see that there was no house there, but could see one about three-quarters of a mile further. I made up my mind to reach the barn – it was debatable whether or not I could reach the house. However, I reached it about six P.M. and was taken in and taken care of. I had food and water, my flying clothes taken off, my feet soaked and rubbed in snow, and went to bed.

In two days I felt able to ride a horse back and we rode ten miles to the nearest telephone and notified Salt Lake. From there we made the journey by bob sled and automobile arriving in Salt Lake at 6 P.M. five days from the date of departure.

The general interest shown in the hunt was a revelation to me and the efforts in the Service, and co-operation and willingness of outsiders to help, seems almost beyond belief.

The very next month, Boonstra crashed a second time in the snow-covered mountains. On January 4, 1923, he left Rock Springs, Wyoming, headed for Salt Lake City, Utah. The Watsatch Range was blanketed with heavy snowstorms. Unable to stay below, Boonstra chose to try to fly over them. At about 18,000 feet, his engine quit and as his plane dove back into the storm, Boonstra lost his bearings. He managed to the pull the airplane out of its final spin just before slamming into the ground. The airplane was completely destroyed, and Boonstra lay unconscious in the wreckage for at least three hours. As he noted in his forced landing report, "Attempts to get down to get visibility I caught a glimpse of the trees just before hitting them. The plane was totally wrecked and I was knocked unconscious and cut and bruised about the face. After coming to I put on the snow shoes and walked over to the railroad and returned to Salt Lake City by train."