In this highly interactive area, visitors are immersed in examples of how stamp content, design, and production have changed over time and how modern U.S. stamps reflect the nation’s identity. Here, too, visitors explore their own connections with stamps. At three touchscreen tables, they sort through the National Postal Museum’s collection and create their own stamp collection based on the topics that interest them most. Nearby are stations where visitors can create their own stamp designs.

Visitors also have the chance to view videos in which stamp designers talk about their craft, stamp collectors explain what they collect and why, and footage shows how stamps are produced.

In this video two Illustrators, an art director, and curator discuss digital and traditional methods of modern stamp design.

Daniel Piazza (Curator): There's no piece of paper on the face of the earth that's more gone over than the square inch that comprises a postage stamp.

Ethel Kessler (USPS Art Director): To me, it's just a great honor to be struggling with that question of how do you make it look good at one inch square.

Howard Koslow (Illustrator): You want to public to enjoy the stamp and at the same time learn that it is American history.

Nancy Stahl (Illustrator): I've been known to point at my stamps out on the street and show people, total strangers, you know, "I drew this!" I have to show them and tell them that that's my stamp.

Koslow: I felt very good about getting the stamp assignment because it, it said something to me. It said, "Oh boy! Here's a chance to document our American history."

Stahl: When I first got the assignment, I thought of it as just another assignment. Only then I began to think, this is part of our country and part of our culture. The fact that you can see what our country has gone through, it's really exciting.

Koslow: I've designed and illustrated 60 stamps, including the Brooklyn Bridge stamp, the four branches of government, the quartet of jazz artists, the lighthouse stamps, and the signing of the U.S. Constitution.

Stahl: I've done probably like 20 images that have been made into stamps. The lion and from the library, wedding hearts. I've done Christmas knitted stamps. There was a series of animals. Rockefeller Center, it's a dollar stamp so I was pretty special. I went to Rockefeller Center to buy it so that was kind of fun.

Piazza: In the 1960s, the Postal Service really sought out outside illustrators to depict the subjects that they wanted to print on U.S. stamps. Art directors at the U.S. Postal Service are responsible for going out and finding the actual illustrators or photographers.

Kessler: The very good question is how to approach the art for stamps. That's a very small space, and we can put a lot of information if it is structured so that the eye can see it at stamp size.

Stahl: I think most people don't realize how much work goes into a stamp. When I begin a stamp, I'll do a little drawing that breaks down the shapes. Then I'll scan in that sketch and block in the colors.

Koslow: I work with acrylic paint. The amount of colors available are tremendous.

Stahl: I spent a lot of time refining it, trying to simplify it, trying to break it down to its essence. I will work day and night for weeks bringing this together until it looks right to me.

Koslow: You really have to simplify a statement and make it come through very quickly. Once I've established the large pattern, I'm pretty much working with a number two sable brush and a magnifying glass.

Stahl: Sometimes in the middle of working on the stamp, I will get up and walk clear to the other end of my apartment and take a look at it from the distance and get a little perspective on how it's going to be when it's a stamp size.

Koslow: Another tool we have—it's old fashioned but it works—and it's called a reducing glass.

Stahl: You just keep changing and refining, and it's difficult to decide that you are done. Very often, it's my deadline that decides that I'm done.

Piazza: Both the art director and the artists who actually create the images printed on the stamps, want to get every little detail just right. If they're showing a general and uniform, is it exactly the right uniform with the right number of medals and stars? If they're illustrating a lighthouse, are there the right number of windows?

Kessler: People want to count the bricks and make sure that he's got the right number of bricks.

Stahl: When I've done a stamp and it appears on my mail, it comes to my door, I just think it's exciting. I think it's really, really fun. I don't know why it gives me such a charge, but it does.

The composition of a stamp must be strong and original, and the design has other special requirements. A stamp image should be simple but eye-catching and stand out from the background. The design must reduce well, leave space for letters and numbers, and be difficult to counterfeit. Some stamps show works of art, but the designer does not merely copy the artwork. Rather, the designer uses graphic elements from the art to create a new design that works as a stamp.

This video traces the history of stamp production from nineteenth-century hand-operated presses to modern offset production with print runs in the billions.

Changes in technologies and available materials have affected the look of stamps—and will continue to do so. Today engraving is still used to produce some stamps, but sparingly because of its high cost. Other methods include photogravure, which “engraves” the metal plate using chemicals and light rather than tools. Offset lithography uses flexible rubber or aluminum plates, which are not engraved at all. These processes are easier and less expensive than engraving, and they produce more colorful images. The look of stamps will continue to evolve with technology.

Made possible by Richard C. Sennett

This video is of stamp collectors, including youth, talking about what they collect and why.

Carlos Vergara (Stamp Collector): As collectors we all have a fantasy of finding undiscovered treasure, of putting the puzzle pieces together, of having something that everybody else appreciates.

Bill Gross (Philatelist and Philanthropist): The essence of collecting whether it's stamps or coins or anything else is to bring order from disorder, to put something together.

Karen Bertha (National Postal Museum, Council of Philatelists): Stamps cover a number of different subject matters and it's an opportunity to learn about so many different things.

Shannon (Age 15): Collecting stamps is fun and it's cutting dosing like once you start you can't really stop.

Kastytis (Age 10): I was interesting talking stamps because my dad also collected stamps when he was young.

Harper (Age 9): Stamp collecting is pretty cool, because anyone can do it.

Vergara: I was born and raised in Chile in South America and as a schoolboy, I began collecting stamps. We moved to the United States when I was 11 years old, and the connection to my stamps was way to still have that link to my heritage, the history of my country. All my materials that I collect are kind of esoteric. Most of it comes from relationships with friends and fellow collectors. I've shared with others, others have shared with me. Ifound my little treasures, but I also found hundreds of people with whom I correspond, I spend time with. That true community is something that I really, really treasure.

Izadora (Age 11): There's so many different stamps, like any topic you want.

Shannon: I have a lot of stamps from every country in the world.

Kastytis: This one is funny because it has a big head and I like that they're interesting to look at.

Bertha: I was introduced to stamp collecting through one of my cousins. We started going to First Day of Issue ceremonies as well as stamp shows together. Stamp collecting does involve going out and meeting interesting people. That is what is so exciting about collecting, it broadens the mind. In addition to being a philatelist, I'm also a genealogist and I have used stamps to chart the journey that my family has taken. My early ancestors came from Guinea Bissau to the Bahamas and then Key West. There's absolutely no price for what I've learned from my stamps.

Izadora: I have a large space collection that's like my number one, probably more than anything. I have a lot of animals. This is like reptiles. This is dogs and cats. This one was about the first dog to go into space and that like mixes my two collections of space and animals and dogs. I think that's cool about it.

Gross: I got started as a eight or nine year old, rode my bike to the local stamp shop buying five and ten cent stamps. Stamp collecting is a very satisfying hobby to see that it's the collection as opposed to just pieces of paper. To know that it's something that you've embedded a lot of your own time and effort into is a very satisfying reward.

Don Sundman (National Postal Museum, Council of Philatelists): Bill Gross wanted to add my stamp to his collection, and I wanted to keep my stamp. I loved my stamp, and I just wanted to keep it.

Gross: But I had a sense that he might be willing to give it up if he got something more spectacular.

Sundman: The Jenny plate block is coming up for auction, and it's only sold a few times in my career. Bill Gross proposed buying the plate block and trade it for my 1-cent Z-Grill.

Gross: It formed the complete collection, so to me it was complete success in philately.

Izadora: I think covers are cool because sometimes they have like letters inside. And of course, it's like so cursive if I can't write them but they're just cool to collect, too.

Harper: My favorite kind of stamps are Nigerian stamps with birds on them. I love birds. That's why I love the stamps.

Gross: Anything that fascinates an individual in terms of collecting can be done, you know, relatively inexpensively. Cars, flowers, the Civil War, Mickey and Minnie, and other Disney characters. It's a wonderful way to express your own interests or your own particular enjoyment and sharing with family and friends.

Stamp collecting ranks among the world’s most popular hobbies. As many as 22 million people collect stamps in the United States alone. Stamp collectors represent all ages and walks of life. Some have very general collections; others focus on special topics. Most are intrigued by the diversity of people, places, and objects illustrated on stamps. They want to learn where and when stamp were issued, who designed them, how they were printed and used. To these collectors, stamps bring history to life. Most of all, people collect stamps because it is fun. 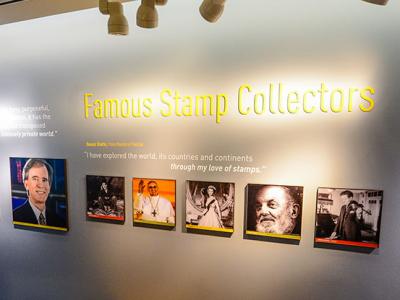 Who are today’s collectors? What is collected? And why do they collect? Collectors fit no specific social group, economic group, or personality type. Some enjoy their hobby in private; many join local and specialty clubs; others participate internationally through exhibitions, societies, and auctions.