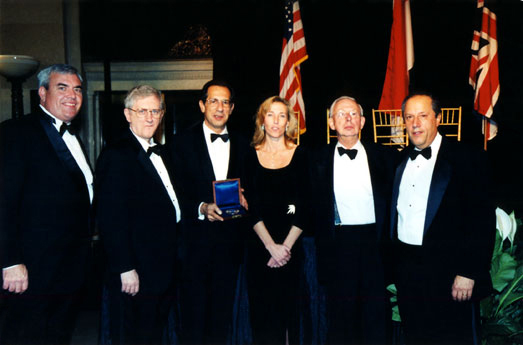 His Serene Highness Prince Rainier III of Monaco (1923-2005) was an ardent philatelist and is internationally recognized for his promotion of philately. The Musee des Timbres et des Monnais (The Museum of Stamps and Currencies) was founded under his patronage and houses his extensive personal collection. He was also responsible for the creation of the Club of Monte-Carlo of the Philatelic Elite, whose membership includes the directors of the thirteen major philatelic museums.

Charles Wyndham Goodwyn (1934-2015) was appointed Keeper of The Royal Philatelic Collection, by Queen Elizabeth II, in 1995 and served until January 2003. In this position he worked to raise the visibility of philately and is responsible for making the extraordinary Royal Collection available to philatelists and the general public around the world through exhibitions in Great Britain and 14 countries in Europe, Africa, Asia and North America. He was a Signer of the Roll of Distinguished Philatelists and served as President of the Royal Philatelic Society.

John R. Boker Jr. (1913-2003) was the quintessential philatelist. His outstanding collections included fancy cancels from the 1847 U.S. issue and extensive international holdings from the German States, Australian States, Buenos Aires issue, Ionian Islands, Reunion, Serbia and many more. His articles and papers covered a wide range of subjects. For his exceptional contributions to philately, he received the Luff Award of the American Philatelic Society, was invited to sign the British Roll of Distinguished Philatelists and he also was honored by the Collectors Club and the Berlin Philatelic Club.